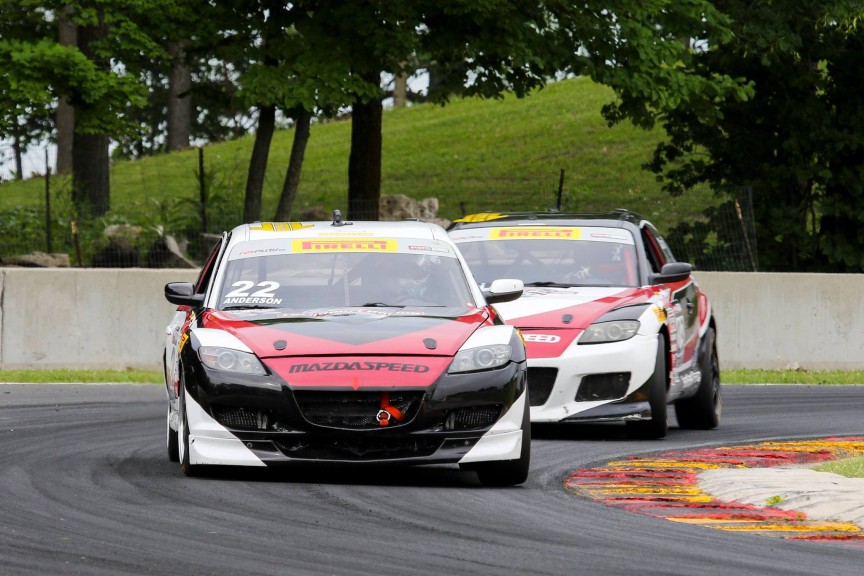 Another great weekend, for the Tech Sport Racing Team.

The #25 TCB Chevrolet Sonic driven by Johan Schwartz was facing an uphill battle right from the start. After a late ruling from PWC to again make the restrictor plate smaller, Johan still managed a 5th place finish in round 7 and a 3rd place finish in round 8. But in round 9, he was stuck in 5th gear the entire race.

In TCA,Gino Carini driving the #23 MazdaRX8 was able to get up to speed after only one day of testing and in Round 7, with just a few laps to go, was racing for 2nd. Gino would end up 4th in his first race, a great accomplishment. In Round 8 Gino Carini was involved in a bad incident at the start that left the car heavily damaged. The crew lead by Jason Saini was able to repair the car, borrowing many parts from an RX8 that just happened to be parked next to us. Time was limited since round 9 was just hours after the incident. But Gino still managed to run 4th most of the race in a car we didn’t even get to put across the scales. Toe was the only adjustment we had time to make. Gino would up 6th. Excellent driving Gino!

The #22 TCA Mazda RX8 driven by Kevin Anderson was the best it’s been all year. The car finished 2nd in round 7 and then 3rd in round 8. Unfortunately while running 2nd in round 9 the car developed a pretty noticeable vibration under braking. Being conservative under braking dropped Kevin to 3rd place but eventually the right front brake rotor broke into a million pieces. Luckily this happened in turn 6, one of the slower corners and fortunately it broke after applying the brakes which trapped a piece of rotor in the caliper. allowing a the brakes to safely stop the car.