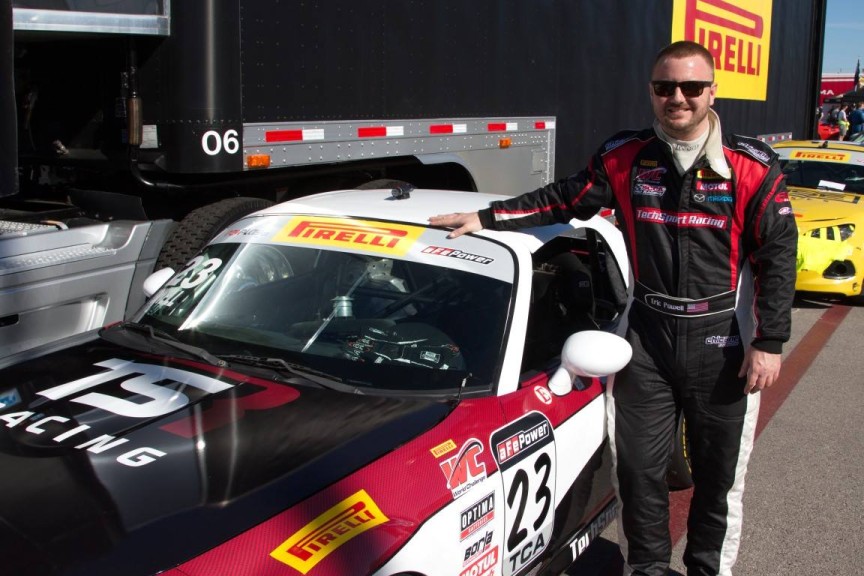 Powell, a full-time stunt driver for Walt Disney World, brings an already healthy resume with over 16 years of racing to his credit. Eric’s past experience stems from a wide range of karting prior to racing stock cars for several years and making a transition to road racing in 2006 with a figurative cliff-jump into a Pro Formula Mazda test. He has since showed success at every rung of the ladder in various disciplines including open wheel (a former Jim Russell Scholarship winner), Touring cars (including stints in the Former Grand-Am Koni Challenge series), and GT cars (testing for an ALMS GT2 team). Most recently Eric built and developed his own 1997 Mazda Miata for National Auto Sport Association (NASA) competition winning three national championships leading to being selected for Mazda’s prestigious annual “Mazda Road To 24 Shootout” for the past two years in a row. In addition to some other club racing rides and development roles, Eric remains active driver coaching and instructing for racing schools. For more information about Eric, please visit http://www.ericpowellracing.com/

“The opportunity to race in Pirelli World Challenge next year with a championship-proven team is a dream come true for me and something I have been working towards for a long time!” said Powell. “Kevin and the whole Tech Sport Racing crew’s commitment to winning gives me a lot of confidence going into the 2016 season. I can’t wait to get started and hopefully repay all of their hard work. The Mazda MX-5 platform is pretty familiar to me and to be able to continue my relationship with Mazda is very important to me as well.”

“We are very pleased to have Eric driving with us. He is very talented and will be a huge asset to the team,” said Tech Sport Racing Team Owner Kevin Anderson.

Tech Sport Racing, established in 2013, is a professional race team based in Long Island, New York. Founded by longtime racer Kevin Anderson and Deborah Popolizio, Tech Sport Racing won both Team and Driver Championships in the 2015 Pirelli World Challenge TCB class. Tech Sport Racing is once again poised for success in 2016 with multi-car campaigns in both the TCB and TCA classes. For more information on the team or associated programs please visit http://techsportracing.wpstagecoach.com/